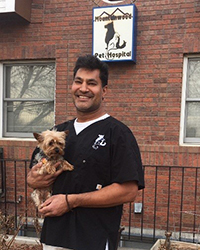 Arun received his veterinary degree from the University of Minnesota in 1994 and completed a small animal internship the following year at the University of Missouri. After 14 years of working in private practice, he broke out on his own and opened Mountainwood Pet Hospital in Windsor in 2008. This practice filled a niche for clients who wanted down to earth, compassionate, and personalized care for their pets.

Arun has two dogs, Puck and Penny. Who are also MWPH meeter and greeter’s.  In Dr R’s spare time he likes to golf, play hockey and go skiing with his 2 sons Tage and Rayne. 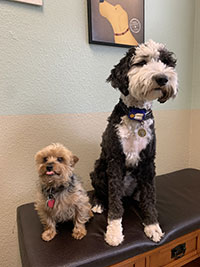 Arun has 2 dogs: Penny and Lola. 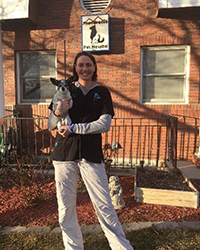 Janie graduated from Colorado State University with her DVM in May 2003. She practiced at several small animal hospitals in Fort Collins before joining the Mountainwood Pet Hospital team in July 2009. Her special interests include internal medicine, client education and working with animal rescue organizations.

Originally from Kansas City, Janie has resided in Fort Collins since 1995 with her wife, Gail, and their two children, Luke and Claire. Her four-legged family members include Jake (Lab/Husky mix), Kobie, (pictured), Pepe (chihuahua) and Rudy, the cat.

When not at work, Dr. Janie spends time with her family and enjoys being outside, running and biking in beautiful Colorado.  Prior to Veterinary school, Janie was a competitive swimmer in the Kansas City area, as well as, The University of Florida.  She competed for our country at the 1992 Olympic Game in Barcelona, Spain, where she won a Gold Medal in the 4X100 Medley Relay.  She also competed in both the 100m and 200m backstroke. 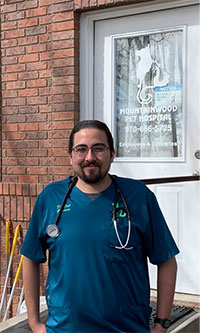 Joel grew up in Fort Collins, Colorado after moving from his hometown of Hastings, Nebraska as a young child. He attended Colorado State University for a Bachelor’s in Biomedical Science in Spring of 2015 and Doctor’s of Veterinary Medicine in Spring of 2019.

He has three cats named Franklin, Nalah, and Rain. In his free time he loves hiking, fishing, and enjoying the outdoors. He is excited to be part of an amazing team of professionals who care for your loved one’s day after day. 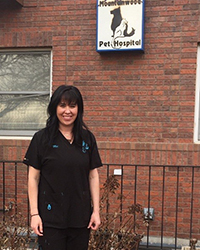 Melissa graduated with a degree in Visual Arts at the University of Northern Colorado, followed by an Associate of Applied Science, and then later found her passion for veterinary medicine and became a Certified Veterinary Technician. She has always had a passion for animals and animal rescue/adoption, and has been with Mountainwood Pet Hospital since 2008. Melissa enjoys life with her husband Ryan and daughter Harper.  She also loves being artistic, getting outdoors and spending time with family, friends and her many “furry kids”! Melissa’s sweet and gentle nature, and her great love for animals, makes her a favorite among furry friends and their families. Seeing patients leave the veterinary clinic with a new lease on life is something that motivates her every day. 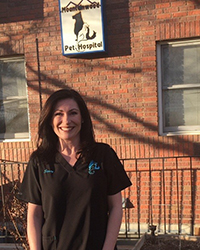 Stacy moved to Colorado after marrying her husband Aaron in 2001.  They have been married for 15 wonderful years and have 2 children, Zoey and Austin.  Her four-legged family consists of her Yorkie named Zeke (pictured), a cat named Kaz and Hazel , her strong willed and energetic GSP. After being a stay at home mom for 10 years, Stacy decided to go back to school.  With a lifelong passion for animals, she knew a career working with pets would be a dream come true.  In 2014, she graduated with an Associate’s degree in Applied Science.   Later that year she became officially certified as a Veterinary Technician. Working with Dr. R and the MWPH team is a rewarding and fun experience for her every single day.  She cherishes each opportunity to share her love for animals and her commitment to each one of our clients.   Stacy’s hobbies outside of work include spending time with her family and friends, gardening, cooking and music. 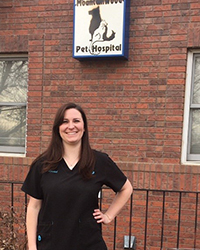 Rachel was born and raised in California, and moved to Colorado in 2012 to pursue her education.  Her lifelong love of animals led her to pursue a career where she would be able to help them every day.  Rachel recently graduated with an Associate’s degree in Applied Science, and is currently working on completing her certification as a Veterinary Technician.  Rachel resides in Loveland with her husband, David, their GSP Summer, Dasher the Papillon, and their cat Belle.  Rachel enjoys spending time with her family, the outdoors, traveling, and reading. 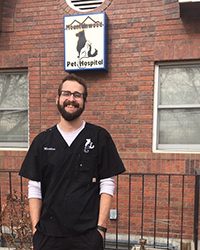 Matthew recently moved here from Texas in hopes to pursue his lifelong dream of becoming a veterinarian. He graduated from University of North Texas with a degree in biology. Matthew has always loved caring for animals of all shapes and sizes, he once owned three rats! He currently resides in Fort Collins with his wife Natalie, 2 daughters Ivy and Joie and two cats, “Squirt” and “Harvey.” Matthew is very eager to continue his knowledge of veterinary medicine and could not have found a better place to do that! He is extremely committed to his work and loves seeing the pets he helps care for leave happy and healthy. 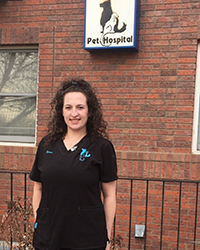 Renee was born and raised in Golden, Colorado. She moved to Greeley in August 2001. She graduated front he University of Northern Colorado in 2005 with a Bachelor’s degree in Elementary Education/Spanish emphasis. She earned her Master’s degree in Counseling Studies from Capella University in 2012. Animals have been a part of Renee’s entire life. She lives in Greeley with her husband Matthew, son Logan and daughter Emily, two bloodhounds Seymour and Ellie and Mastiff Opie. She also has three cats Marvin, Ludo and Ferguson. 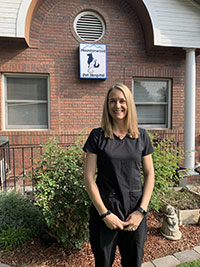 Jane was born and raised in Colorado and has been living in Windsor for eight years with her husband & three dogs Maddie, Charlie and Gracie. She graduated from CSU with a Bachelor’s degree in Health and Exercise Science and earned her Master’s degree in Sports Administration from UNC. Jane has always had a passion for dogs and is excited for a career change in helping animals. She spends her free time volunteering with Big Bones Canine Rescue and hopes to start a rescue for senior and hospice dogs one day. 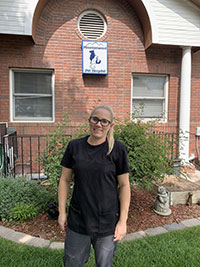 Brittany has been with Moutainwood Pet Hospital team since February 2019. She received her veterinary assistant certificate in 2007. She always knew her passion was to work with animals and to be around people who shared her passion as well. Brittany is originally from Las Vegas area and moved to Colorado in 2009. She currently resides in Severance Colorado and shares her home with her wife, English Bulldog Bentlee and African Gray Parrot Otto. In Brittany’s free time she enjoys playing hockey, soccer and spending time with family.